Recently, I heard from an editor who’d published an essay of mine a few years ago. She’s moved into corporate communications, where the $$$ is much better than in publishing, and wanted to hire me for a project.

These days I seldom do content/corporate writing. That’s how I made my living in my 20s/ 30s, until my husband encouraged me to focus on creative projects. Having a partner who financially supports your creativity is a privilege that has benefited my career and allowed me to work on a memoir. Still, I sometimes chafe at the arrangement. Why? Because earning money feels good.  But the truth is, it’s really hard to work on a book and freelance at the same time. And with 3 kids, my time is always short. 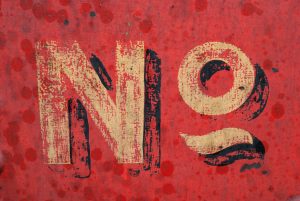 Photo by Gemma Evans on Unsplash

My point is, I should have said no.

The day the editor contacted me, I had $72 in my work checking account and only $150 due to come in from my last piece. I was flattered that this woman remembered me. I didn’t need the money to keep the lights on, but the prospect of a big-ish check that would pay for my next writer’s conference getaway was enticing. I said yes.

Once I dug into the assignments, I regretted my decision. I had to bring work with me while traveling with my daughter’s soccer team. Instead of enjoying the beach, I was holed up in my room at the Sheraton, writing insurance company copy. I mean, it was good to be earning $, but it wasn’t fun.

I turned in the assignments and got paid. I complained on social media that I hadn’t enjoyed the project (without going into detail), and a friend commented that she’s been trying to get writing work for years and would love someone to hire her for anything. And I felt like an ass.

A few days later, I was listening to the wonderful podcast #amwriting with Jess and KJ. The ladies were interviewing David Sedaris,  and when they asked him about the early days of his career, he said that from the start, he had a vision for what he wanted his writing career to be. As his career heated up, he said no to opportunities that weren’t consistent with that vision. He turned down lots of cool offers because they weren’t going to help him get him where he wanted to go.

That’s why he’s David Sedaris, I thought, and you’re not.

While I very much appreciated being offered content work, I should have said no. I’ve said yes to several things this year that  I shouldn’t have, and then I walk around frustrated and twitchy because I’m not moving forward fast enough on those bigger, creative goals that are close to my heart. And when I grab an opportunity that’s not really right for me, I’m also standing in the way of someone somewhere who would really, really love that gig.

Again, I want to acknowledge that saying no to paying work is a privilege not everyone can afford. ( And Jess and KJ never asked David Sedaris how he paid his bills in the early days of his career when he was saying no to distracting offers! I wish they had. ) But regardless of what kind of financial situation you’re in, this much is  true: EVERY TIME YOU SAY YES TO ONE THING, YOU’RE SAYING NO TO SOMETHING ELSE. None of us has unlimited time or energy. We can’t do it all. We have to cultivate a vision for the future and make choices accordingly. Maybe we have to say yes to less-than-exciting jobs sometimes to survive, but then we balance that out by saying no to other things, like binge-watching Netflix, to grab that creative time.

The fact that I need to consciously say no more often isn’t a revelation. But hearing a famous author matter-of-factly explain how clear he was — and is —  about his priorities was inspiring. From now on I’m going to ask myself WWDD — What Would David Do? Maybe it will help.