I just completed a writing residency through the generosity of the Northwest Playwrights Alliance and Ms. Leticia Lopez, who donated the use of her cute rental home in Walla Walla, Washington (check it out here on VRBO). They asked me to write a short reflection on my week, so here it is!

I’m a wife and frazzled mother of three children, ages 11, 12, and 13. I’m also a writer, which means I crave uninterrupted creative time, but I make do with what time I can get in the midst of family chaos. I write while my kids are at school. I write in the car while they’re at soccer practice. Sometimes I wake up early to write. I ignore the perpetual mess in the house as much as possible.

I’ve been working on a book, a memoir, for — let’s just say a long while. In a push to finish in 2015, last fall I decided to look for residency opportunities. While the writer in me dreamed of a month-long get away, my maternal side insisted I pursue shorter retreats. In December, I applied for a one-week residency through the Northwest Playwrights Alliance, and in January I received the fabulous news that I’d won. I’ve just returned from my week of solitude in a sweet little house in Walla Walla, Washington, and although I didn’t get as much work done as I’d hoped, the experience was still everything I needed.

For most authors, writing a book takes years, but notable exceptions exist. Jack Kerouac supposedly wrote ON THE ROAD in three weeks. Muriel Spark took only a month to finish THE PRIME OF MISS JEAN BRODIE. Irish novelist John Boyne gave up eating and sleeping and cranked out THE BOY IN THE STRIPED PAJAMAS in just two and a half days. In the weeks leading up to my residency, I felt so anxious and desperate for writing time that I allowed myself to imagine that I’d fall into an exquisite artistic trance as soon as I hit Walla Walla and finish my book before the week was up.

HEY, IT COULD HAPPEN.

My husband’s wonderful parents flew into Seattle from Denver to help him with the kids. I left my Volvo for their use, and hopped a short flight to Western Washington. Although I’d been told that I could easily manage in Walla Walla without a car, I rented the cheapest compact available and drove straight from the airport to the grocery store to load up on foods healthy (bananas, broccoli, brussels sprouts, oatmeal) and unhealthy (steak, potato chips, Ben & Jerry’s Half-Baked). My plan was to prepare all my meals for the week on Sunday night, wake up early Monday morning, and write like a demon straight through to the following Sunday morning (and you know, finish my book.)

This ambitious agenda failed to take several important factors into account. Anytime I leave my family, I leave exhausted. I work until the very last minute making sure all contingencies are covered: food in the fridge, laundry done, house in order, pages delineating the kids’ schedules and logistics related to their sports practices and school activities compiled and printed. This trip was no exception. After fleeing Seattle in a frenzy, I bought groceries in Walla Walla in a fugue state, raced to the residency house, and collapsed. Instead of cooking everything that night, I ate ice cream and potato chips for dinner and stumbled to bed. 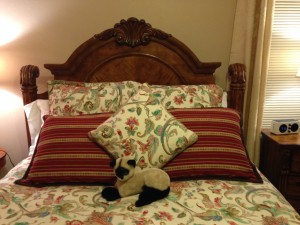 I had to take a picture of the stuffed Siamese cat in the rental house before I crashed. I love Siamese cats.

I didn’t make any real meals or do any real writing for a couple of days. I was tired, in mind and body. Panic filled me as I watched the clock ticking away on my time – MY TIME! – but then I thought about how Anne Lamott says that writer’s block is not about being stuck, it’s about being empty. Empty is how I felt. I walked in circles, read Poets & Writers magazine, took naps. I gave myself permission to rest, stay calm, and trust that the entire week wouldn’t evaporate without at least some writing progress made.

By the time Wednesday rolled around, I finally felt up to roasting a big pan of chicken, potatoes, and brussels sprouts. 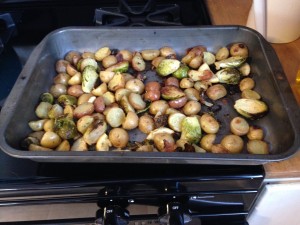 I forgot I actually cooked the chicken in a separate pan. So I made two huge pans of food, finally.

I started writing too, and took long walks across the campus of Whitman College. Walking while daydreaming has always been one of my favorite pastimes, one that I’ve essentially forsaken as a busy parent. The quiet, the solitude, the freedom made me feel like I’d reconnected to my younger self, or maybe to my essential self.

I now felt so centered and grounded that I could admit that I’d been temporarily insane to think that I could write a book in a week. I’m a slow person. I’m slow at everything, especially writing. A week’s residency wasn’t going to make me over. I could only use this gift of time in a way that was consistent with my inherent nature. During the second half of my residency, I sat in front of my computer, staring at the screen and/or writing slowly, for three or four hours each morning. In the afternoons, I brainstormed essay ideas, researched potential magazine and journal markets, and read, all important career-related activities that I rarely have quality time for. I walked and daydreamed. I also took time to create an editorial calendar for my multiple blogs. I loaded all my ideas for short pieces into the organizing app Trello, and BAM! I had a game plan for getting essays and blog posts published through the end of the year.

A childhood friend of mine, Kristen, happens to live in Walla Walla, but because I planned to write my whole book in a week, I scheduled just one get together with her, for Saturday night. I think I talked her ear off since I’d been mostly silent for six days had drank a glass of wine, but it was lovely to see her. 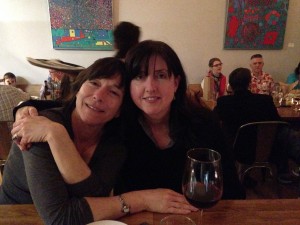 We’ve been friends for more than 30 years!

By the time Sunday morning arrived, I had a finished chapter instead of a finished book to show for my efforts. Still, I accomplished far more creatively during my week of residency than I ever could have accomplished at home. More importantly, I was no longer empty. I boarded the flight to Seattle with a lump in my throat. I was excited to see my family again… but I would have loved just one more week in Walla Walla.

One Response to “The Week of Magical Thinking” 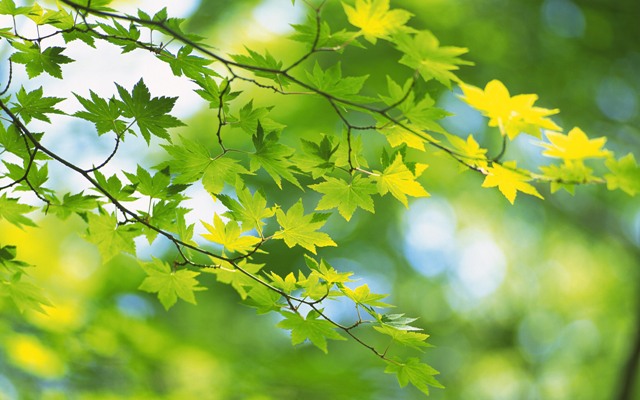