This week I wrote a light-hearted essay  about texting with my kids for Redbook. I had so much fun looking through some of the texts we’d exchanged in the last couple of months,  which almost feel like a collaborative diary chronicling our hectic lives! I used some screenshots from my phone to illustrate the piece, so my 12-year-old daughter and 13-year-old son, both rabid texters,  really  should have gotten byline credits.

The Top 5 Ways I Text With My Children

I’m the mother of three kids who are obsessed with technology. Persuading them to step away from the screens feels like a constant, losing battle. My 14-year-old daughter, an introvert, lives perpetually hidden under headphones, listening to books on tape, or else can be found absorbed in a YA page turner on her Kindle. For my younger daughter, who just turned 12, and son, 13, raging extroverts both, life is one long Instagram/Snapchat/texting extravaganza — at least until somebody jumps in the ocean with his iPod tucked into the pocket of his swim trunks and drowns the party.

After that unfortunate swim last week, I informed my son that if he wants a new iPod or phone, he needs to save his own money to buy one. However, his current tech-free status makes it impossible for me to text him, which has turned out to be pretty inconvenient. Suddenly, I realize all the ways that I rely on texting to communicate with my kids.

Obviously, my kids are old enough to stay home alone sometimes, which doesn’t mean that I don’t worry about what mischief they are getting into while I’m out. (Hello, Internet!) Quick check ins from me probably have zero impact on their unsupervised behavior, but work wonders in terms of quelling my anxiety. If a kid texts back, then I know for sure the house is not on fire, or if it is, at the least the wifi is still working. 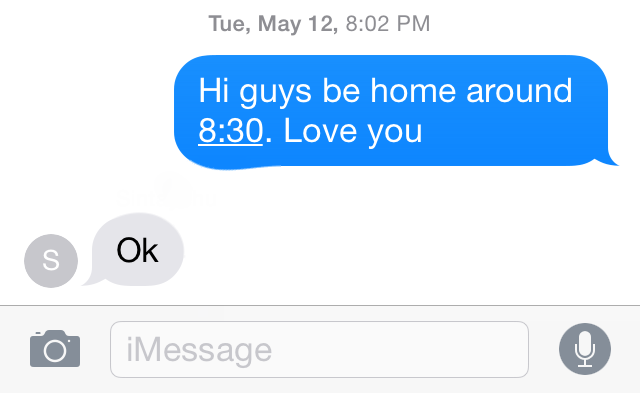 Yesterday, my son spent several hours at home alone, and without a text check in, I worried the whole time (but not enough to actually pick up the phone and call him. That would be helicopter parenting.)

Read the rest of the piece at redbookmag.com